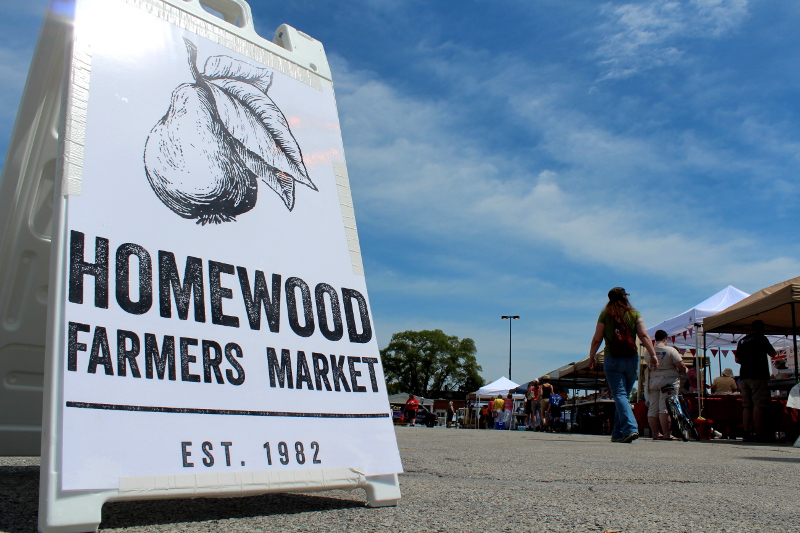 The Homewood Farmers Market underwent some tweaking over before the season began, and market manager Kate Duff indicated the changes seem to be working well so far this year.

During the market Saturday, June 21, Duff said attendance has been up this year. At one market earlier in the season, she counted about 600 visitors, "and that wasn't even a very busy week," she said. It was, however, approximately 50 percent more patrons than typically visited during the 2013 season.

The most obvious change is the layout of the vendor booths, which provides a wider avenue between the two rows of vendors.

"It gives people a chance to congregate," she said, noting the narrower aisle last year seemed to reduce mingling and socializing.

Patron numbers aren't the only ones on the rise. Vendors, too, have flocked to the market this year, according to Duff. Typically there are 15-25 vendors each Saturday.

One factor was a reduction in vendor fees, she said. Several new vendors have made appearances this year, and several former vendors have returned.

Another popular new feature is market space for community organizations.

"Originally we said there would be three a week, but today we have five," she said.

Local school organizations, the Homewood-Flossmoor Park District, South Suburban Gardeners and the Homewood Public Library are some of the community groups using the opportunity to reach out to their constituencies at the market.

The community groups don't have to pay booth fees, but neither can they offer products for sale, Duff said.

Two physical features were added this year, picnic tables for people to rest and listen to the music provided each week, and a Kids Zone with tables and things for children to play with. The Village of Homewood provided the picnic tables, and AT&T provided the Kids Zone tables, Duff said.

Homewood Farmers Market is open from 8 a.m. to 1 p.m. each Saturday through Oct. 11 in the Homewood Village Hall parking lot at 2020 Chestnut Road.