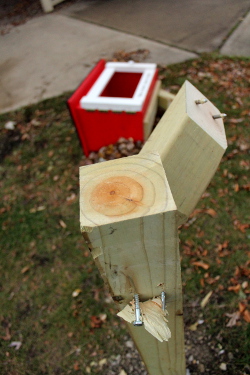 The Little Free Library in Homewood's Patriot Park was vandalized for the second time in a little more than than a month, according to Homewood Library Director Amy Crump.

Crump discovered Sunday, Nov. 16, that the wooden box holding books had been knocked from its post, damaging the supports and bolts. The Plexiglas front to the library's door was removed, too. The LFL was last checked several days earlier.

Fourteen donated books were ruined by the weather, Crump said.

The LFL is one of four built as part of an Eagle Scout project led by Troop 342 Scout Henry Heligas.

Vandals struck in October, less than a month after the Patriot Park LFL was installed, but Heligas and his stepfather, John Millen, made repairs and restored it to its spot near the playground.

LFLs provide a place for readers in a community to exchange books. Anyone can donate books to the library, and anyone can take books. Heligas' project was intended to give parents and children reading material while making use of local parks.

In addition the Patriot Park spot, there are LFLs in Millennium Park in Homewood and Leavitt and Goldberg parks in Flossmoor. The Leavitt Park LFL has also been struck twice by vandals.