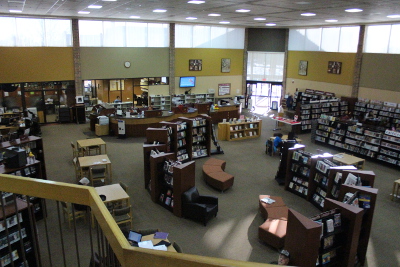 Despite losing nearly 20 percent of its expected tax revenue income, the Homewood Public Library is managing to maintain services by making cuts and using reserve funds.

The Homewood Library Board knows this is not the best strategy, but reducing current expenses will help get the library through the downturn, Library Director Amy Crump said.

“I feel confident that the steps we’re taking now in cutting budgets and figuring out how we can squeeze every penny out is what’s going to help us” continue offering the outstanding level of service, she added. “We could stick our heads in the sand but we’re not choosing that approach. The board is working hard with me to make sure that the library remains an asset during these challenging times.”

The library gets 97 percent of its revenue from  property taxes. Because of tax caps, the library this year can only increase its budget at the Consumer Price Index level, which is approximately one percent.

And, there were two months in the 2015 fiscal calendar that required three monthly payrolls rather than the usual two for its 53 full- and part-time staff. Those extra paydays set the library budget back approximately $60,000. The board balanced its last budget using $277,348 from reserve funds.

Flor pointed out that overall library expenses were up just one percent from the previous year.

In preparing its budget for the July 1, 2015-June 30, 2016 fiscal year, Crump urged the board to use as its starting point the amount of taxes the board actually received last year, so it built its budget using $2.304 million as the target. That’s a reduction of approximately $225,000 from what it had anticipated.

One small budget cut was the elimination of free coffee. The board anticipates a savings of $8,000 yearly in coffee and supplies costs. Those dollars will be re-appropriated into other library accounts.

Crump said replacing the boiler and tuck pointing are the major capital improvements this year. These projects are not necessarily things patrons will see, but maintenance on the 25-year-old building is essential. The board has set aside $129,000 for the work. In 2014, elevator repairs were made. The library interior was updated in 2009.

“The three year goal is by end of fiscal year 2018 we will be putting money into reserves rather than taking money out,” Crump said. “We’re still optimistic it’s not always going to be this way. What we’re focusing on now is to continue providing the services that people want to the best of our ability and for as long as we can.”