Reginald Torian Sr. has a mission.

The soul singer from Country Club Hills wants to bring renewed attention and appreciation to the music and message of a Chicago music legend, Curtis Mayfield.

Torian will bring the voice and music of Mayfield to the stage Saturday, Jan. 31, in the world premiere of his music revue, "All Things Mayfield."

The show at the Promontory in Hyde Park is the latest phase of Torian's project.

The show will include 30 songs with an 11-piece ensemble supporting the singers. In addition to Mayfield classics like "People Get Ready," "Freddie's Dead," "Choice of Colors" "Superfly" and "Gypsy Woman," the program will include originals by Torian ("Daddy Loves") and by Flossmoor songwriter Charles Childress ("I Woke from a Dream").

Torian is uniquely qualified to keep Mayfield's legacy alive. He followed Mayfield as the lead singer of the Impressions, joining the group about two years after Mayfield left to start a solo career.

But Torian not only sings Mayfield's songs, he sounds a lot like Mayfield, whose smooth falsetto was his trademark. Torian said he learned how to sing that style by immersing himself in those sounds when he was a young singer in Chicago Heights.

He had an Impressions album that he played over and over, even putting it on when he went to bed, with the speakers under the bed, so he could hear the sounds as he fell asleep.

That gave him a sense for the fine details of Mayfield's singing, his inflections, attitude and emotions.

"I got to the point where I started to breathe like Curtis," he said.

And he's been singing Mayfield's songs for more than 40 years.

For several years after Torian joined the Impressions, the group continued recording on Mayfield's record label. Torian remembers the first time he entered the studio to record with the group and Mayfield stopped by the session.

"I think there was something about me that intrigued him," he said. "He really drove me to excel, to be perfect."

Torian said Chicago is the right place to launch what he hopes will be a growing musical revue. Mayfield, who died at 57 in 1999, grew up in Chicago's Cabrini Green housing development.

His music became one of the signature sounds of the 1960s. A number of his songs were adopted by members of the civil rights movement. One of them, "People Get Ready" was listed by Rolling Stone magazine at 24th in its list of greatest songs of all time. 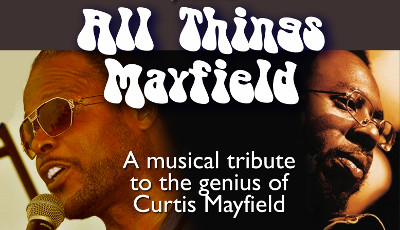 "This music has just as much relevance today as it did then," Torian said, citing the protests in recent months following the deaths of Michael Brown in Ferguson, Missouri, and Eric Garner in New York. "Things have changed, but in some ways they haven't changed. Race is still a factor."

Mayfield's songs about race are appealing and timeless, though, because they are a positive response to difficult issues, according to Torian. They have a kinship with the message of Martin Luther King's civil rights campaigns, advocating understanding,  tolerance and persistence.

"Keep on Pushing" was reportedly an unofficial anthem of the movement. "People Get Ready" was inspired by the 1963 march on Washington and King's "I Have a Dream" speech. And "We're a Winner" was a favorite of civil rights activitists.

Torian's mission to keep the music and its message alive is not new. He began working the earliest version of the revue a decade ago, performing the music for his church with only a guitar for backup.
The project has grown steadily since.

He starred in "It's All­ Right to Have a Good Time: The Curtis Mayfield Story," at Chicago's Black Ensemble Theatre in 2012. The play led to the development of a bigger, more ambitious version of the revue, which will feature some of the actors from the play.

Torian hopes the revue will keep growing. He envisions a version with a 40 to 50-piece orchestra to provide the music.

This contribution to music and social history has some urgency, too. His partners in the Impressions, Sam Gooden and Fred Cash, are still going, but Gooden is 80 and Cash is 78.

"They call me 'the kid,' and I'm 65," he said. "I don't want to see it fade out or not get the attention it continues to deserve because there's no one out there willing to or can do it and keep it pure. As my guys fade out ... it just seems now is the perfect time to revive Mayfield's music."