By Sharon L. Filkins
Time to read
3 minutes
Share
Print
Published 4 years ago
Last updated 4 years ago
Upon entering the main reception area at Sunrise Assisted Living in Flossmoor a visitor’s eyes are immediately drawn to a large, bright, multi-colored block quilt hanging from the two-story domed ceiling. The brightness and beauty of the intricately detailed pattern of the quilt personifies the life of its creator, Dolores Janowiak, a resident at the facility.
Janowiak, who is a lively, spirited 85 years old, stated that of all her work, the block
quilt piece on display at Sunrise is her favorite. It is titled “Dolores’s Baby” and was installed in the reception area in October with a small ceremony in her honor.
She explained that it is called a block quilt because it is a form of quilting in which the different blocks are purchased monthly over a year's time, and the quilt took her two years to complete.
Quilting is only one of her numerous artistic skills. She has also designed and made beautiful stained glass pieces, created jewelry and made life-sized whimsical dolls, such as Raggedy Ann and Andy, ballet dancers and baby dolls. She knitted and crocheted exquisite pieces such as three-dimensional wall hangings, beautifully beaded purses and bed throws. 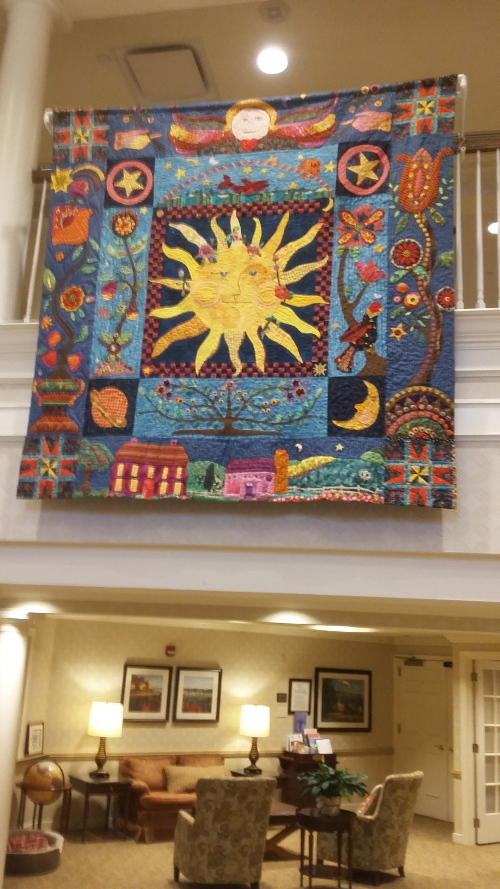 Not only has she created and designed hundreds of pieces in each category through the years, she has also taught classes in quilting, knitting and crocheting.
“If someone is interested in quilting, I always advise them to start small. Creating a quilt is not only daunting, it is expensive,” she said.
Raised as an only child, Janowiak said that at the age of 8 she realized that she was the happiest when she was making something.

“It was like an uncontrollable urge to be making something. I was sewing my own clothes in high school.” Laughing, she said, “My family affectionately called it ‘manic’ and I think two of my granddaughters may have inherited the ‘manic’ gene in the family.”
Married in 1951 at the age of 20, she decided she wanted to make aprons for her entire family and her new extended family, but there was one problem. She didn’t have a sewing machine. She would go to her girlfriend’s house and use her machine until her new husband finally bought her a Necchi machine, described as one of the most beautiful sewing machines designed in the 1950’s.
The aprons were only the beginning of her creative endeavors. She raised five children
― four girls and one boy ― and sewed all their clothes.

“It was a three-day process for each outfit. It was an assembly line, cutting the pattern, sewing it together, adding the finishing touches, etc. It kept me busy, but it was fun. I continued until my girls stopped wearing dresses in high school,” she said.
With her continuing obsessive urge to “make something” she found a Homemaker’s Group and fell in love with the crafting projects they were making. She also made a good friend and they did everything together.

“We found a stained glass class, and that was the beginning of my stained glass phase. I learned to make lamps and also did small and large pieces. I created the design and then made the pieces. My designs were always different. I learned the entire process of cutting the patterns, doing the leading and fitting it all together. “
Then, at the age of 50, two events changed Janowiak’s life. She found the Quilter’s Plus Club through a newspaper ad. At that time, it was meeting at the Flossmoor Village Hall.

At the same time, she decided to go to college at Prairie State College (PSC).
She fell in love with the quilter’s club, where she accepted the position of membership coordinator on her very first visit.
Ultimately, she graduated from PSC, went on to Governors State University (GSU), graduating with a degree in liberal arts and a minor in psychology.

“I did it one class at a time. It took me 14 years, but I made it,” she said.
While she was attending college, her love of quilting blossomed, and she eventually became president of the quilter’s club.
Each spring, she would join 35,000 women in Paducah, Ky., for a five-day quilters convention where she attended classes with top designers. She also attended quilting events and shows in Hilton Head, N.C., Pigeon Forge, Tenn., and Branson, Mo.
Her quilting specialty eventually boiled down to the appliqué procedure.

“It is very similar to stained glass designing as you are fitting pieces together,” she said.
In what Janowiak called her “heyday,” her beautiful quilts were on display at the Flossmoor Library. And about eight years ago, her daughters rented space at GSU during a fine arts exhibit where many of her pieces were on display. She also has had exhibits of her work featured at the Tall Grass Art Gallery in Park Forest.
One of her most memorable quilting experiences was making a huge quilt measuring 9 feet by 11 feet, which was used as a backdrop for a play at the former Illinois Theater in Park Forest.

“It was a unique experience. It took several women from our quilting club to complete it,” she said.
Although Janowiak has had to slow down in recent years due to a diagnosis of Parkinson’s Disease and macular dystrophy, a type of macular degeneration, she stays involved with a weekly book club using audio cassettes to keep up with the discussions.

“It is also my hope to be able to mentor people who want to get started on a project and just don’t know where to start. I can help them with the first step in a thousand mile journey,” she said.
She added that being around creative people is fabulous, and she would encourage anyone interested in quilting to visit the Quilter’s Plus Club, which meets the second Wednesday of each month at the Blakey Center, 1 S. Rebecca St. in Glenwood.

For more information about the club, visit  quiltersplus.com or call the Blakey Center at 708-753-2438. 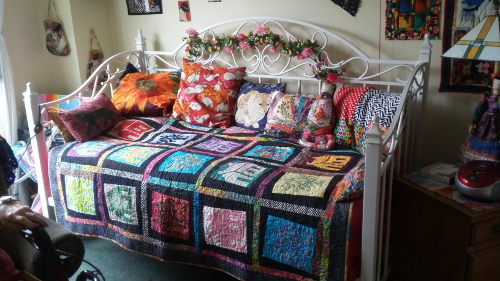