Plans for a Flossmoor veterans memorial were put on hold in 2020 by the COVID-19 pandemic, but a group of residents reemerged this week to get the project back on track.

Under the banner of Flossmoor Veterans Memorial Inc., former mayor Paul Braun and roughly 15 other residents are behind the project. Their aim is to construct a veterans memorial to recognize residents of Flossmoor, living or dead, who have served in the United States armed forces. Braun, the not-for-profit corporation’s president, presented their plans Monday, Aug. 2, to the Flossmoor Village Board during its regular meeting.

“What we are trying to do here is not a war memorial,” Braun said. “This is supposed to be a memorial to honor all Flossmoor residents who have served our great country.”

“I like to call it the veterans wall of honor,” Mayor Michelle Nelson added. “It recognizes not just those who have died but people who are living here in Flossmoor”

While the corporation intends to do its own fundraising, construction and placement of the memorial, the chief “ask” of the village is support in securing an easement from Canadian National, as the railroad owns the proposed 9,650-square-foot site at 2525 Flossmoor Road. The triangular piece of property runs along the tracks to the west, and Park Place and Flossmoor Park to the east.

Village Attorney Kathleen Field Orr said her understanding is that CN would not convey the rights of the property to anyone other than the village. But Flossmoor could enter into an easement agreement with CN, with the idea that as long as the memorial is there the village can use the space. Flossmoor would then lease the rights to the memorial corporation. The village would have to approve plans for the project, but the corporation would be responsible for its construction and maintenance, Orr said.

Architect Mike Matthys said the group intends to hold regular fundraisers to bring in $4,000 to $5,000 annually following construction for maintenance and to save in case larger work is needed down the road, similar to how the Public Art Commission maintains the village’s sculptures. But Orr and Village Manager Bridget Wachtel noted the partnership aspect of the project means if the committee fails to meet its maintenance obligations, the village would have to assume that responsibility.

The proposed memorial includes a circular area defined by a stone seat wall as well as five steel pillars representing the branches of the armed forces. Each wall has a star cutout. Matthys said the idea is that when the sun shines through the pillars, it will illuminate the plaza.

The plaza itself is to be made with clay brick pavers that can be purchased and engraved to honor residents who have served in the military — a key element of the corporation’s fundraising efforts for the plaza. The center of the plaza is to feature a dedication plaque. A green space called “The Honor Yard” will flank the circular plaza, with illuminated U.S., Prisoner of War and Flossmoor flags.

“We liked the idea of pushing the meaning of the memorial to something that was a little more abstract than the original honor roll,” Matthys said. “Instead of an honor roll … we’re calling this the honor wall.”

A preliminary budget suggests construction of the memorial will cost roughly $99,805. Braun said 650-700 names of Flossmoor veterans have been compiled thus far as possibilities for the brick paver honors.

One of the major forces behind the creation of a memorial is Richard Condon, whose father was an American Legion Post 625 official when funds were raised for the memorial, which was dedicated on April 1, 1945. In the 1950s, the original memorial went missing.*

“We don’t know what happened to it,” Braun said. “Since at least the ’50s, there has been no recognition for Flossmoor residents who served our country.”

Discussions, prompted by the H-F Robotics Club, started in 2019 about possibly creating a new memorial, and the committee intended to start raising funds in March 2020 before the pandemic derailed those plans.

The group reviewed six spaces for the memorial, according Matthys. What they ultimately liked about the proposed space is the tree canopy, exposure of Flossmoor Road and the space for possible events there, he said.

A community outreach event and fundraising kickoff is tentatively slated for 2 to 4 p.m. on Sept. 12 at the Flossmoor Community House. The plan is for a program inspired by the original 1945 memorial dedication. And Braun said he is excited to get the project moving once again.

While the item was presented solely for discussion, several trustees gave the memorial a nod of approval during the meeting.

“I think it’s a fantastic project,” Trustee James Mitros said. “I think you guys have done this in a big way, and I wholeheartedly support it.”

Artist's renderings of the proposed memorial 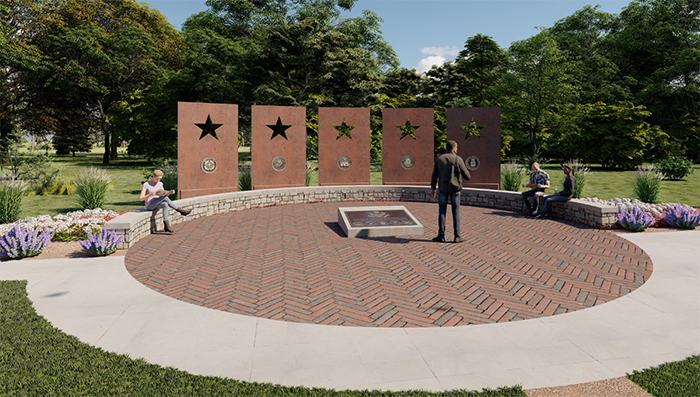 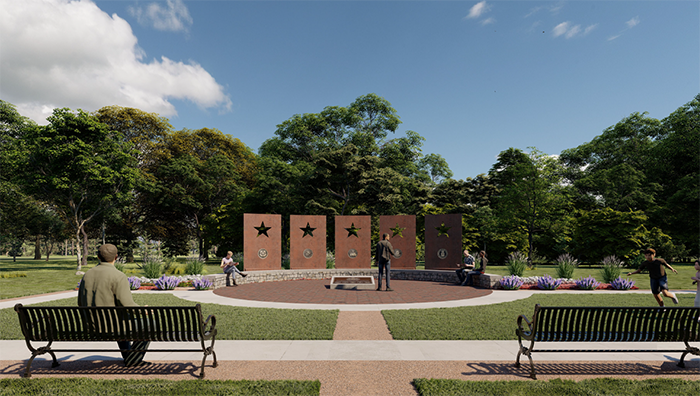 Correction: The story previously described Richard Condon's father as the builder of the original memorial based on information provided at the meeting.