Caroline Schoen is all about the details. The Homewood-Flossmoor High School junior paces the girls cross country team in large part because she cares a lot about the small stuff.

Schoen maintains a food Instagram at @carosfoodaccount. There’s an obvious attention to detail in her smoothies, salads and cookies. She said that’s just her personality and it extends to her running.

“I’m a very detail-oriented person. I’m a perfectionist,” she said. “If we’re doing a track workout and I hit a certain time, all the other runs have to be that time. It’s just about holding myself accountable. That’s how I show my perfectionist side in running. It might not always be a good thing.” 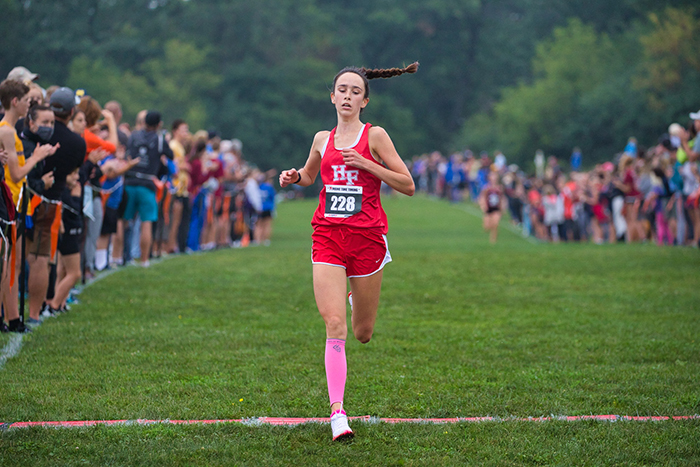 Her diet is on display on her Instagram. It's motivated in equal parts by healthiness and aesthetics. Many of the brightly-colored recipes are vegan, gluten-free or low in saturated fats. They’re meant to look pretty but also provide the right kind of fuel for training.

Perfection is the goal with her grades, as well. Schoen said she’s ranked in the top 10 in her class. H-F coach Mary Kate Pack, who also had Schoen in class, called her top runner the “epitome of a student athlete.”

“You have to be present for the pain, present for every step and every mile. She’s willing to do that. She’s willing to say ‘I’m not going to zone out. I’m going to pay attention to how I feel at different parts of the run. I’m going to say I can go faster instead of becoming complacent,’” Pack said. “She’s a junior now and she’s starting to become a student of the sport. We talk more about what the workout is, why we’re doing it, what the pace needs to be, why it’s there. She can really be an active part of her training plan which is cool to see.”

Being that present in the parts of her life that are important to her takes effort, something Schoen never has a problem putting forth.

She said between track, cross country and maintaining a weighted GPA over 6.0, her social life may not quite be what she’d like it to be. It’s still a priority but school and running come first.

“I think it says a lot about who she is. She wants to do her best in everything but she’s still kind in doing that. She’s very humble and just wants to better herself in all different areas,” Pack said. “She really is the real deal. She’s great.”

Last year, when Bolingbrook runner Kaylee Pannek was injured after her bike was struck by a vehicle, Schoen helped organize a gesture of support. She and her Vikings teammates wore “Run for Kaylee'' shirts to their Sept. 10 meet.

“It was just an act of kindness, even though we are competitors,” Schoen said. “It was to show that we were there for them. We had to do something so I just stepped up and took the leadership role to initiate it. I felt like if that ever happened to one of my teammates, I would want someone to do the same for us.”

One of her goals for the season is to post a time below 17 minutes. Her current personal record is 17 minutes, 41 seconds, which she ran at the Southwest Suburban Conference pre-conference meet last month. It was more than a minute better than second-place finisher Kayla Shea of Lockport.

“I’ve been focusing on the mindset that not every race has to be a crazy fast time and not every race is going to. I’m focusing my training toward the postseason,” Schoen said. “I’ve had super high expectations for myself and being in that mindset made it hard when there was a race where I did perform well but it wasn’t the number I wanted to see.”

Starting a race a little too hard is a flaw Schoen believes she sometimes has. Pack isn’t sure that’s a problem, though. She remembers a race at Huntley High School during the track season.

Schoen often runs ahead of the pack by herself, especially in cross country. On that day, an opponent pushed her.

“She was just like ‘No. This is not happening today,’” Pack said. “As a competitor, she doesn’t like to lose and that’s really fun to see. Even when she is on her own, which is a lot of races, she’s able to focus and race against herself.”

Schoen would’ve qualified for the state meet as a sophomore but the IHSA canceled all fall sports state championships due to the pandemic. It was difficult to accept at the time but now it’s just motivation.

“I never saw her dwell on it,” Pack said. “I think that is a total goal now, to be in that top pack at state.”

In the spring, Schoen got her shot at state in the 1,600 and 3,200-meter runs in track. She finished 13th and 7th in those races and came away with invaluable experience. Both she and Pack say the aim now is a top 10 finish at state in November.

“Experiencing state, knowing in the last race of the season I tried my best and left it all out there, I think that would put a smile on my face even if I don’t reach my end goal,” Schoen said. 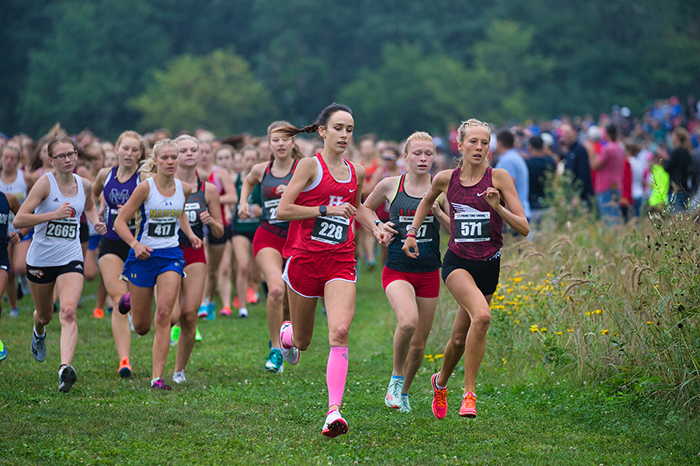